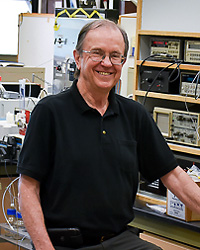 Fellow of the Chemical Institute of Canada, FCIC

Honorary Fellow, the International Association of Water and Steam (IAPWS)

Prof. Peter Tremaine, FCIC, is a Professor of Chemistry and holds the NSERC/UNENE Senior Industrial Research Chair in High Temperature Aqueous Chemistry at the University of Guelph. He came to Guelph as Dean of the College of Physical and Engineering Science (2001-2006), and has held positions as Head of Chemistry at Memorial University of Newfoundland (1990-1996), Manager of the AOSTRA In Situ Oil Sands Research Program at the Alberta Research Council (1986-1990), and Research Officer at Atomic Energy of Canada Ltd. (1975-1980). Prof. Tremaine’s research is centered on high-precision measurements of aqueous chemistry at extreme temperatures.  His work has had an impact on the fundamental science of hydrothermal systems; thermal and nuclear power generation; heavy oil recovery; geochemistry; and materials science. His contributions have been recognized through his Chair, which is funded by the Canadian nuclear industry; by a Fellowship in the Chemical Institute of Canada (FCIC); as a recipient of the North American Calorimetry Conference Sunner and Huffman Awards; Honorary Fellowship in the International Association of Water and Steam (IAPWS); and the International Water Conference Paul Cohen Award.  He is a former President of IAPWS, and served on the Scientific Advisory Panel to the Board of Directors of Atomic Energy of Canada Ltd. from 2007 to 2011.  He currently teaches physical chemistry and supervises a group of five graduate students, two research associates and two postdoctoral fellows, engaged in pure and applied studies on the physical chemistry and geochemistry of solutes and materials in high-temperature water under conditions encountered in nuclear reactor primary and secondary coolant circuits and geological spent fuel repositories.

Dean, College of Physical and Engineering Science and Professor of Chemistry, University of Guelph (2001-2006)